Strawberry Fields Festival holds a very special place in the hearts of thousands of people from all walks of life. Many even travel across the globe to be amongst the gumtrees of the music & art retreat that blesses us with its presence each year as we enter into the Australian summertime. For ten years now, Strawberry has been bringing people together, helping us discover artists we never realised might be right under our nose, and allowed us to create the kind of long-lasting memories that couldn’t be experienced in the same way anywhere else.

To celebrate Strawberry Fields Festival’s tenth anniversary, we asked a few congregants of the institution to highlight a moment that they’ll never forget.

I lost all my friends somehow on the first night and bumped into a mutual friend. We ended up having the most amazing time and properly bro-ing down and spending so much time together. She’s still one of my best friends to this very day. She had this friend named Jed who was super sexy and I was encapsulated by his striking charm, and his gentle demeanour had me swooning. We somehow got lost together and were sharing this moment at the main stage in the early hours of the morning, smooching like we were 16 years old and had no cares in the world.

The music at the main stage, which was playing mysterious ambient dreamy house sounds, started playing a very familiar bass line and I soon recognised it to be Booka Shade’s ‘In White Rooms’. Being one the main artists I was looking forward to seeing over the weekend, I quickly jumped up and without realising, my legs were full-balling through the crowd as I legged it to get as amongst the tune as humanly possible.

I soon realised that I had impulsively lost myself and I never saw dreamy boy ever again.

It was Strawberry 2014 and I was at the front of the stage. I spotted this absolute legend just laying in the sand, kicking his legs as if he was riding a bike, spinning a bright pink parasail with the biggest grin on his face. He was just down there kicking his legs like a turtle that couldn’t get up for as long as I was boogieing there. Before I left, I just wanted to let him know how much I appreciated him.

I sat down and told him how much I admired his energy, that he made my day and that I loved him. Three years later, I ended up working with him for Frothlyf but I hadn’t realised it was him — at this point he was a new friend. He had UV rainbows across his cheeks and shared it with me when he saw how excited I was about them. Working together, we got to know each other more and got on really well. We had great banter, both with a passion for art and adventure. Then later in the year we were at Strawberry Fields together, sitting in the sand talking shit and I realised that he was that absolute legend that I’d met years ago and thought I’d never see again.

Emma and her BFFL Dylan

When I think of Strawberry, I’ve got this memory that always pops into my head. Basically, it was my first ever doof, being in shock from the difference of your one day festivals compared to the vibe of Strawberry overwhelmed me. The music, the stages, most of the people were just really special.

Benji and Harry enlightened after meeting the random hugging stranger

One of my best mates and I were sitting near the main stage of Strawberry Fields 2016 on the Friday night. Pretty startled by everything going around us, a guy approached us out of nowhere with a massive smile on his face. He initiated a conversation with us about how he feels the need to spread the love, gave us a little talk about it and said, “we’ve only got one life to live, what’s the point of living it begrudgingly? Love everyone with all opportunities, love the earth and most importantly, love yourself.” He continued to give us a sort of ritualistic hug that felt like it went on forever and then vanished into the crowd.

I’m not going to lie, I was weirded out at the time by this stranger. He didn’t seem intoxicated or hippie-like but just a man keen to spread the love. He may not have known about my insecurities and any anxiety I had but he definitely pointed me in a good direction to help me through that with just a handful of words. 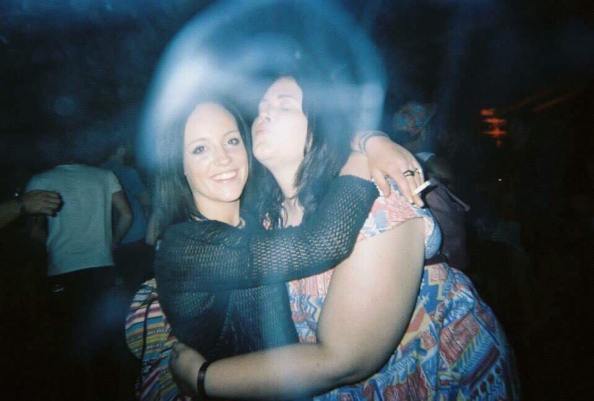 Cass staying out past 1am because Grandma raver was too

I’ll never forget the moment when my friend and I were walking from one of the smaller stages to the main stage to see the Baha brothers playing and I had forgotten to bring my glasses and so was only wearing dusty contacts at this point. I spotted this woman from a distance and as a joke I said, “someone brought their Gran to Strawberry,” not sure if it was true as my long distance vision isn’t that great. As we approached the dance floor we realised that it was in fact a silver-haired lovely old lady absolutely tearing up the d-floor.

She was rocking an Akubra hat, just cutting shapes and my mate and I were about to home to bed at 1am, but the moment we saw her we thought if she was out here dancing up a storm then we might as well stay too. She was living her best life and inspired us to do so too.

It made me feel good to see all different ages letting loose on the dance floor. That’s why I think Strawberry is so special.

I’ll never forget the times at Strawberry when the whole gang was together — everyone is doing their own thing these days, or living overseas so it’s hard to find the time to be together. Life is so busy. We usually have a HUGE campsite and our whole site was an entertainment playground. We’ve had cocktails on blow-up couches, 1 million outfits to wear 3 x per day (morning, afternoon and evening). We were wearing so much glitter you couldn’t actually see. If you wanted to find us, you’d discover us by the large alien sarong draped from the peak of our roof across the circumference of our indoor marquee.

We were so close to the stage that we could taste the dust from the dance floor (aka dirt floor) and we were engulfed in the heart throbbing throbbing and mesmerising music that penetrated our ears.

The beautiful sky lights up so brightly that you can even see the saucepan up close. It can get cold at night, so we would spoon one another in our onesies whilst sinking back drinks ready for what would be a night filled with endless possibilities and adventures. Until next time …

I’ll never forget Strawberry Fields in 2014, when Neelix’s intro came and first dropped — there was the biggest thunderstorm that just erupted to that first drop of his set. It was hailing with crashing thunder and the entire crowd was completely drenched and it came out of nowhere. But there’s always times like these every year at Strawbs. The same thing happened during CC:Disco!’s set in 2016 and Chaos in the CBD played after CC’s gear broke and it was like they’d brought out the sunshine.

The first year I ever went, it was my first proper bush festival. It was like freedom. You go there and everyone is so relaxed, friendly, non-judgemental and accepting. It’s the culture of Strawberry that makes it so special. Especially 10 years — a festival usually books the acts and people come for that but Strawberry sells out nearly every single year because of the culture of the festival. Every year the line-up comes out and you don’t know a lot of the line-up and that’s awesome — it’s all about originality and good taste. It’s so diverse. For a hot tip for who to see at Strawberry, see Kamaal Williams. He’ll be playing with a band, and they’re insane.

Tickets are officially sold out but find out how you can get your mitts on some here.