Day Spa – you’ve heard the intriguing name, you’ve seen the extravagant pictures and you’ve hopefully been lucky enough to grace the dance floor that is a live spectacle of a weekly circus. The idea came about when James, Josh and Dustin spoiled themselves with their frequent pampering sessions. After sinking back a few too many Aperol Spritz’s, the friends decided that something was significantly missing in the dance community of Melbourne.

With the birth of Day Spa came a vision – to create a community and space akin to the ultimate experiences found at Sisyphos and Kater Blau in Berlin, the parties of seventh-generation party family, Elrow and Australia’s own Rainbow Serpent Festival.

Day Spa has a vibe that you can almost tangibly touch, and the community grows bigger and bigger as they create and collaborate with the most energetic and positive souls of this city. To find out how it all started, New Rhythms sat down with the crew to find out how it all began, and what’s behind building a community.

New Rhythms: Tell us about Day Spa way back from the beginning. Where did the idea come from?

James: While running a day party on Sundays at Pawn & Co was born out of necessity, the genesis of Day Spa as a weekly event concept is actually quite the tale.

James: Josh, Dustin and myself used to have a monthly pamper ritual where we would all meet at the salon and chat on life, love and everything in between. I think on this particular occasion we were about five or six Aperol Sprintz’s deep – musing on the lack of bonafide experiential multi-sensory events in the club scene in Melbourne.

We wanted to run an event with a consistent and amazing vibe every week, however that would be a different experience every time – the concept of a party with a constantly evolving theme was born out of this. Every week a different opportunity to dress up, a different line-up of DJ’s, different performers and activations and drinks.

Josh: Haha, yes we do love pampering! I think that we have all experienced festivals and clubs in Europe… Australia hasn’t got anything near those experiential touchpoints in our clubs. We don’t have the theatre aspect. And so Day Spa was created with theatre in mind… both theatre of décor and entertainment and experience but also so theatre of ‘user content’… where the person next to you is so fantastically dressed and free in their expression that they themselves are artists.

James and Dustin had a focused view on how they wanted to program the music that they had been developing with their brand Eat Music.

Dustin: I just love being pampered. 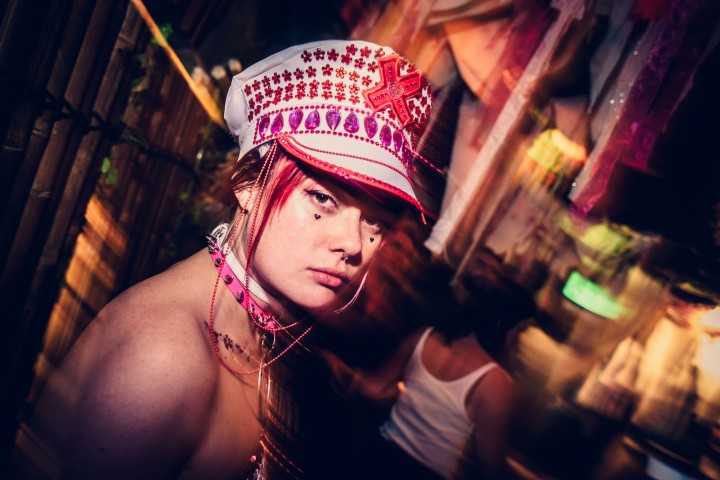 New Rhythms: So you literally used to go down to the salon to do a pamper sesh?

James: Replace salon with any bar or restaurant in Prahran and that’s a bit closer to the mark. But we do think it’s important to look after yourself. 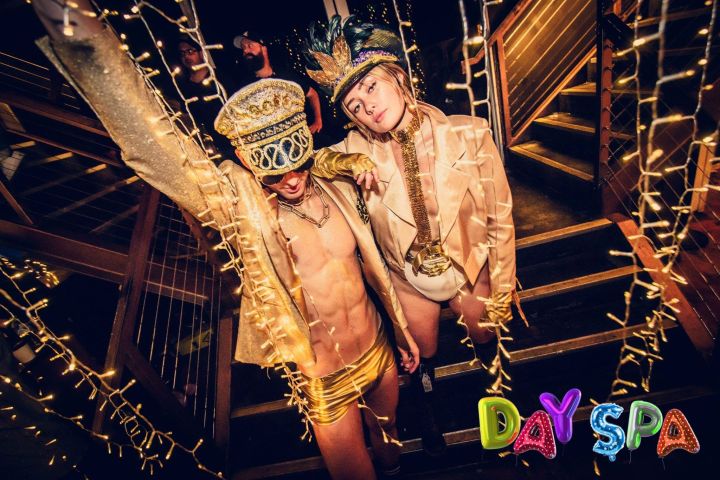 We’ve all got different backgrounds in the scene – which is part of what makes us such a great team. Josh is part owner of Pawn, and at the time Day Spa was born I was the general manager of the venue. Dustin and I had been running Pawn & Co Sundays together for a couple of years before that.

The boring side of how we started Day Spa was to combat the restrictive license at Pawn’s new location on Greville Street—a 3am close on Sunday nights ain’t no fun. So we decided that the only way to keep the old Pawn Sunday magic going was to reshape it into the most epic day party Melbourne has ever seen.

We like to take the best bits of what we’ve seen at festivals and clubs both at home and around the world – from Rainbow Serpent, to Sisyphus and Kater Blau in Berlin, to Elrow. Our dedication to music and quality bookings is first and foremost, but what we felt we could bring to the table was the full customer experience – from quality production and unique décor, to amazing drinks (with freshly squeezed juice as free options for mixers) to conscientious staff and security, to even just thinking about how people get to the party (we offer free Limousine rides in Josh’s old vintage limo on Sunday mornings if you need a ride in).

New Rhythms: You’ve got a really great culture at Day Spa. The vibe is strong. How would you credit that and what’s involved in creating such a community?

Josh: Well it’s interesting what can create a community because the answer might be that a community creates a community in many cases! The growth of the Day Spa community was made possible because of the countless people who have participated through coming and dressing up, dancing and playing together in the extraordinary weekly festival antics. There’s an ever-growing community of regulars who shape the vibe, style and feeling every week.

Beyond that, there are so many people who have gifted their time and expertise and passion to create shows, music, décor and entertainment with a focus on developing something that makes vibe a tactile experience… sometimes it feels like you can touch the energy at Day Spa! 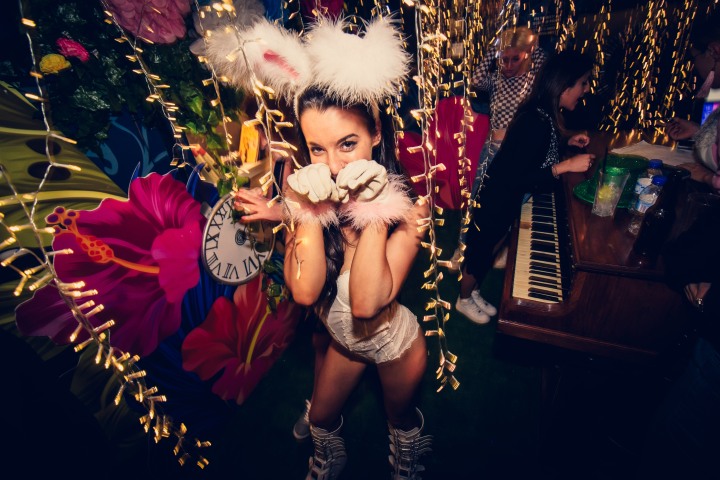 Our Day Spa family of regulars help shape and guide the themes and online content and they are the key in creating the community. There’s also the DJs who are supporters and participants of Day Spa beyond playing great music. They’ll come to play and they’ll play with us afterwards.

There’s other crews who come join like the Babylon gang, Breakfast Club, Melbourne Dance Music Academy and The Sound Project. Every time we join forces with people the Day Spa community grows as cultures merge so well. Then there’s some of the best women in the world who make Dustin, James and myself look good.

Jenny Wong, Storm Nutting and Madaleine Henti-Wilson are the most incredible team across imagining and developing and physically building the creative each week.

The staff at the venue and the owners are stoked to have such an exciting concept as Day Spa which is the new heart and soul of Pawn & Co. To create and be part of a community of all kinds of people has made such a powerful and intimate community in an incredibly short space of time!

James: So we’ll be celebrating Halloween in July with a ‘Nightmare on Greville Street’ headlined by Matt Tolfrey, who is a resident DJ from Fabric in London. Seth Troxler said that he’s the last great British DJ. We’re also launching Jozef Conor’s latest EP – ‘Scary Kids Scaring Kids’ out on The Recovery Collective’s label. These guys are one of our favourite local crews to play with so this one is going to get all sorts of freaky.

There’s some pretty epic themes coming up in the next month of two including Dungeons and Drag Queens, Ode to Muck Up Day and the return of our infamous Active Wear party.

On the guest DJ front we’re also welcoming Zombie Disco Squad, Harvey McKay and a very special one we can’t tell you about yet (but we can tell you he was one of our favourites from Rainbow Serpent Festival 2018).

Really though, you can’t go wrong whichever Sunday you choose to come down on – our weekly festival is always a vibe and always welcoming.