Whether you love staying in on the weekend or are a lord of the Chapel Street routine there is little chance you haven’t heard of Melbourne’s own musical Goliath, Sunshine. Her energising and refreshing take on electronic music is like a breath of fresh air after a big night out.  Currently she has released her own label Disco Faith Recordings which incorporates her iconic gospel tech sound featuring her hand-picked Disco Faith Choir. With such a unique take on the ordinary night out, her shows have sold out without fail. Reasons like this are what make the Melbourne scene so special. It’s so lovely when its sunny.

New Rhythms: You have recently launched your record label, Disco Faith, how did this project come about?

Sunshine: Yes thats right. It wasn’t a deliberate decision to start my own label. It started when I wanted to make a track with a live choir vocals on it and
then get them to perform at the record release party. But I was planning on putting it out on an already established label.

During the process of writing the track I ran into a few hurdles, one being it was hard to find a choir that would sing on the record and perform at a club at 2am for the release party. I ended up forming my own choir and calling them Disco Faith Choir and went about finishing the track ‘Here To Stay’. Once the record was finished I started the process of working out which label would be the right fit for ‘Here To Stay’ but after I did the first Disco Faith Choir live show at the first Midnight Mass I was so inspired and it made way more sense to start my own label and use that as a platform to put out the music I plan to write with Disco Faith Choir and thats how Disco Faith Recordings started.

NR: Having a live choir is a great angle to approach a club event, how does this change your work process, from preparing your tracks to presenting them in the venue? Are there any challenges ?

ST: The funny thing is I was only ever thinking about that first record release party but it was so well received and I felt really inspired having new challenges to work with. Now I’m up to my 4th instalment in a couple of weeks which is really exciting. It’s definitely different to how I’d prepare for a DJ set and theres a lot of preparation that goes on behind the scenes from getting the sets ready, rehearsals, planning how it will look/sound on stage, etc. To make my DJ set and live choir all sound in sync on the night, I need to pre-plan every part of my set down to how I use the filters on a mix so the choir know the music and transitions really well, whereas my normal DJ sets are very much about making those decisions in the moment.

The biggest challenge for me is putting a set together which represents what I think is a great DJ set from track selection, how mixes build, etc and to have the choir be able to sing the vocal ideas I have over it. Quite often there will be a pad-sound or synth-line that doesn’t clash with a lead vocal but does clash with vocal harmonies that the choir would sing. So there ends up being a lot of swapping of tracks and back and forth with my choir leader until I have a DJ set I’m happy with that also works well for the choir to sing on. 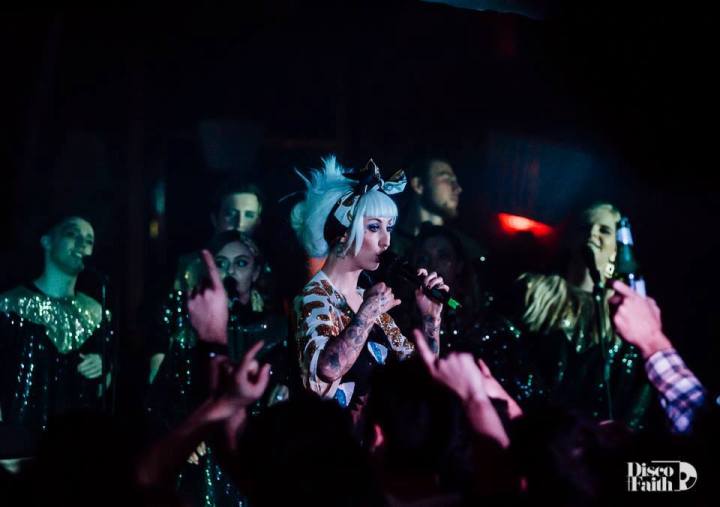 NR: The Night Cat is your venue of choice, do you look out for anything in particular when it comes to presenting your night, something’s that complements your Gospel sound?

ST: The Night Cat is a fantastic venue especially their 360 degree stage. The residency happened by chance. After hearing about the project they were really keen to do a four month residency. I thought it would be a great opportunity to develop the live show and do some north side events as we had only done Prince Bandroom and Revolver.

NR: Four months! That’s plenty of shows! Any surprises on the horizon? How are you planning on differentiating your event? I’ve noticed some different themes like the Gold Edition or Soul Rejoice.

ST: Yeah it’s heaps, each show we do two 45 minute sets which is awesome. Yes there are some future plans but my lips are sealed for now. The four events at Night Cat have different themes. I love a lot of different genres of music and thought the Night Cat shows would be a great way to showcase this. The great thing about doing the two 45min sets is the first set will stick to the theme and the second set will be different takes on that gospel techno sound I do. The first show a few weeks ago was called Midnight Mass – Disco Party and that had a disco music theme. Next weekends Midnight Mass – Soul Rejoice – Will be all uplifting gospel/house and techno. Midnight Mass – West Coast Jams will be that West Coast American sound e.g. Fleetwood Mac, Doobie Brothers, and other stuff along those lines for the first set and the Gold Edition will be the best of the Sunshine and Disco Faith Choir shows so far.

NW: Sounds really fun! So what has been your most memorable moment so far?

ST: Every show has been memorable for different reasons. Whether its seeing a track I love come to life or the crowd reaction to a set/song.

I’ll never forget the first show at Prince. It was so exciting seeing the project come to life for the first time and I reckon I knew every face in the crowd of 400 as they have been supporting my music over the years. That was pretty special getting that support from everyone and the support since then for all the shows has been amazing. Having the first Night Cat show sell out was unreal and I’m so excited for the next 3 coming up.

NW: When are we to expect your next record? I really enjoyed the remixes of ‘Hear to Stay,’ it’s great to see what other local artist can produce with such great samples!

ST: The next release will be finished soon. Thanks !! I was so happy with everyones remixes. I’ve always been about putting different styles of music together in my DJ sets and I want the label to represent that.

For all upcoming releases there will always be a mixture of genres in the release and I’ll be supporting local Melbourne artists. We have so much great talent here.

Catch the Disco Faith show every Saturday at the Night Cat.

Connect with Disco Faith on Facebook/Soundcloud