The Wildlands have returned to stillness for a year as we reflect on what was another splendid weekend of Strawberry Fields Festival for 2017. It was an event that has left us filled with cherished moments, new found friends and a great indebtedness for freshly discovered and already loved artists.

Every year, the breadth of artists and talent broadens and strengthens. Firstly, a shout out must go to all of the organisers on what was an incredibly smoothly run festival. Even the ‘fun-is-never-permitted’ police force of NSW was publicly content with the way that attendees behaved.

The team have completely mastered the location—the main festival site is set up in a loop, which is perfect for adventuring and wandering around from stage to stage or stall to stall. The food options were aplenty, with more tasty options than ever before. We were truly spoilt for choice when it was time to refuel.

For those lucky enough to get work off on Thursday, the Tea Lounge was a great way to ease into the weekend. The young and upcoming collective originating from Geelong, Nomadic Rhythms, opened and closed the Beach Stage on a sunny Thursday afternoon as they mixed their uplifting soulful collections of tracks. Vibes were finely curated by the group along the riverbanks of the Murray on the first day.

The Beach remained as a popular place to be on the Friday, namely when Archie Hamilton, London-based icon, took to the decks. In between his delightful tunes that blend blissful percussion and thumping bass-lines of minimal house and techno, he dropped his own cheeky track, ‘Untitled’. Archie couldn’t even hold in a smile if he tried. The crowd, mostly well aware that he had dropped his unnamed, yet unforgettable track, couldn’t withhold from smiling either.

Dan Bentley opened the main stage on Friday to a large and excited crowd dropping ultimate treats from Fort Romeau’s Secrets & Lies to Dennis Ferrer’s Remix of London Grammar’s Sights. French DJ and Producer, Oxia, then took over with his distinctive skills in selecting ultimate techno bangers to the amusement and enjoyment of listeners. Optimo followed, dropping the heart-wrenching and powerful new song and surely one of the best-released songs of 2017, Glue by Bicep. He then played a techno rendition of Spiderbait’s Black Betty that was odd but interesting and entertaining to the ears. Daniel Avery, a favourite in the techno scene of Australia played fantastic, as per usual before Vaal, a major Berlin artist, played solid dynamic beats to close the main stage for the night.

The Beach was the place to be on Saturday morning, with Saint James opening the stage as revellers took a dip. There’s no better feeling than swimming in the murray as your morning shower while Prince is dropped on the stage in front of you. Followed by Saint James came Big Susan, who mixed old classics and new ones, with Frankie Knuckles’ ‘I Need Your Love’ particularly setting off euphoria into the air. 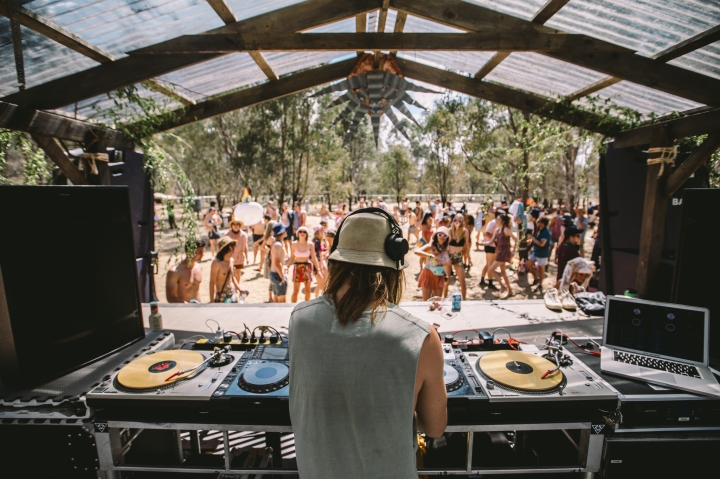 At the Wildlands stage on Saturday, headliner Mall Grab was an absolute favourite. His crowd-pleaser, Pool Party Music did not disappoint and his glistening beats and driving bass sounds got the crowd kicking the dust into the air. Francis Inferno Orchestra played a wide-ranging selection of tracks ranging from Break-beat and Garage to house and techno and other little sub-genres in between.

A very special mention must go to Yothu Yindi and The Treaty Project. The project was created to promote cultural diversity and social equality and change with some of the founding members of Yothu Yindi and Gavin Campbell of Filthy Lucre plus special guests. The group played some of Yothu Yindu’s older material that gained them a place in the ARIA Hall of Fame and their new tunes with an electronic twist accompanied by traditional didgeridoo were welcomed and thoroughly enjoyed.

The necessary reminder of the need for a treaty was crucial and respected by all and the group ended their impeccable performance with the highly acclaimed and powerful song, “Treaty”.

Starting a lot later than originally planned, Total Giovanni were made aware of who their loyal fans were as they set-up on stage and did a sound check as quickly as possible before playing some of their popular tracks including ‘Can’t Control my Love’ and ‘Paradise’. The group are extremely talented in merging the lines between a dance music set and a live Aussie band.

The Tea Lounge was the perfect place to relax in the wee hours of the Sunday morning, as Zeitgeist Freedom Energy Exchange played an improvised jamming Jazz session, followed by festival favourite Tall Paul with his acid piano.

Sunday morning was an absolute treat with Toni Yotzi leading the decks. Hailing from Perth, she is renowned for having a big impact on the development of Perth’s nightlife and now reigns in Melbourne. Following Yotzi was another powerhouse, Peggy Gou. Respected for her absolutely banging live-recorded video-sets for Mixmag and Boiler Room, she did not disappoint the crowd and lifted the whole ether to the next level.

Harvey Sutherland and his loyal band buddies, Bermuda, enchanted the audience with their keys and strings and increased the vibe even more. But the term ‘vibe’ cannot be better defined than by the name of a specific DJ, known as Soichi Terada. I have never seen a DJ create such an atmosphere in a crowd than Soichi. Playing on his Kaoss Pad, Soichi was laughing and enjoying himself nearly as much as all of the attendees put together. The energy was contagious, bouncing back and building between the crowd and him.

Cackling away at the effects he was creating and getting the crowd involved, something suddenly ticked and the moment became overwhelming. As Soichi raised his hands in the air, the crowd erupted into a sea of cheering and celebration. The vibe he had created made him more emotional and brought the legend to tears, as he held his face in his hands and bowed to the crowd.

Antal and Hunee played an incredible B2B following Soichi to celebrate ’20 Years of Rush Hour’. The Amsterdam Label was co-founded by Antal and its fame has been heavily influenced by Hunee. Seeing them play the ‘Rush Hour Flavour’ live was an incredible experience.

A huge congrats and hats off to all of the organisers, the artists, the volunteers, the attendees, the emergency services, the local snag cookers and stall owners, plus everyone who had a part over the weekend. Hopefully SSF 18 doesn’t take too long to come around.