On Sunday, June 4th, I awoke with an empty wallet, shoes covered in mud, and a new appreciation of George Michael.

The day before, I, along with a few thousand others, descended on the Coburg Velodrome for the winter edition of Freedom Time festival.

I hadn’t been to the venue since the first Melbourne Freedom Time in December 2015.

Back then I enjoyed most of Floating Points’ set while lying on my back on the grass, as there was no shade and it was almost impossible to dance in the intense heat.

Although I had heard great things since that day – a sell out New Years Day event speaks for itself – I was a little skeptical.

Melbourne winter is harsh, I am a sook, and if there wasn’t enough protection from the elements, it would be a damper after an almost perfect day of kicking on (from Autosea, of course).

The velodrome had been transformed, to say the least. A big top stretched over a huge disco ball at the main stage; and the surroundings were dotted with food and drinks kiosks, clothing stalls, toilets, and the finishing touch – a ferris wheel.

The highlight of my day came from Andee Frost, who opened his set at the main stage with George Michael’s “Freedom 90”. The crowd on the dance-floor seemed to double during the track, with people flooding in, hugging and belting the chorus.

Following on from this was arguably the most anticipated act of the day, dance music veteran DJ Harvey. Any winter-festival doubts I might have had vanished.

I can’t be sure whether it was because of the crowd, the smoke machine, or the frantic dancing, but the temperature in the big-top definitely rose when Gwen McRae’s “Keep The Fire Burning” played. 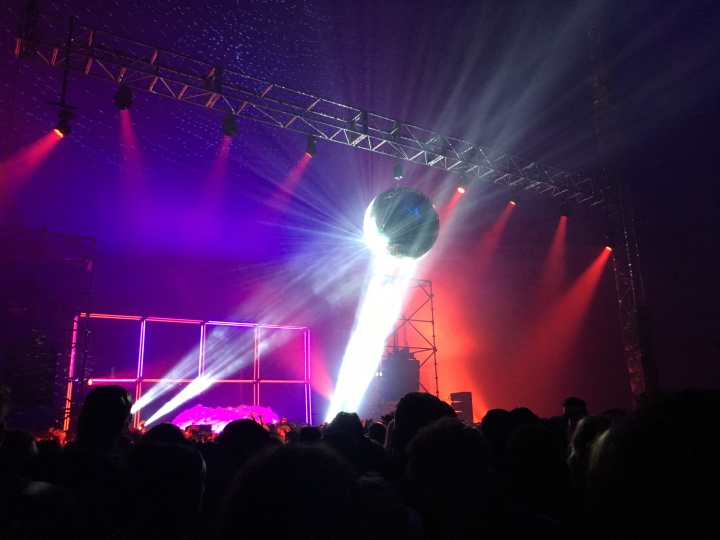 After asking around, it seems that good times were not just had by me, but by almost all.

There were the two girls I spoke to who overestimated the temperature and ended up dropping a couple of hundred dollars on coats at a stall.

Perhaps one of the happiest looking men I have ever seen was wearing a white shirt with what looked like a litre of beer poured on the front.

And possibly most by my friend whom I was assisting in the writing of review, who handed over the duties after realizing her only memories of the day and night were dancing in the back of a smoky tent.

(Andee Frost’s) hats off to all the organizing teams involved for tackling and then pulling off successful festival event in the middle of Melbourne’s grey winter season.