In the lead-up to a new festival, you ponder about what to expect and how your experience will pan out.

‘Will it compare to the festivals I’ve loved before?’, ‘What will the crowd be like?’, ‘Can I justify spending so much money on one weekend?’.

All of these questions were provided with the perfect answers, as the inaugural Pitch Music & Arts Festival delivered an incredible weekend of extraordinary music, artistic displays and a magnificent atmosphere.

With such an impressive line-up of internationals, there was a feeling in the air throughout the four days that many people were experiencing acts they had been eager to check out for a long time.

It created an electric vibe, with the vast majority of the crowd genuinely attending for the love of the music and a good time.

Festivalgoers spent little time at their campsite, with no time to waste.

The festival layout was well-thought-out, with little distance between stages yet no sound interference, and a short walk from most campsites.

And with the backdrop of The Grampians, the location was ideal and was an idyllic view to wake up to in the morning.

The main stage, Beton Brut, was arguably one of the best stages an Australian festival has ever seen.

Throughout the weekend, people couldn’t stop talking about the Funktion-One 32 inch Vero subs provided by Full Throttle Entertainmen, which sent pleasant shivers through your body.

The mayhem kicked off on Friday night and Detroit Swindle had the crowd bopping away, before Oliver Koletzki gave the Beton Brut stage a sample of what was to come with tasty techno.

The Beton Brut stage was something to behold, with an impeccable light show at night.
Photo courtesy of Duncographic/Pitch.

With the stage layout expertly planned, it was a breeze to navigate between Beton Brut and the other two stages, Electrum and Vanish Point.

And the food was top class with a variety of delicious food trucks, as well as an intriguing marketplace inside a circus tent.

Vanish Point was tucked away from the main area and was the place to check out bands on the line-up and quality electronica, disco, house and deep house.

The pair both killed it on the smaller, more intimate stage and left punters satisfied.

Festivalgoers quickly had to make decisions between quality acts, with Midland providing at Beton Brut, while techno lord Donato Dozzy slammed it out at Electrum.

Electrum was situated amongst the gumtrees and was the most artistically impressive of the stages, with anything from cricket stumps to plastic bottles recycled to construct a unique and wonderful structure.

The beautiful trees provided ideal natural shade during the day and the ability to combine the stage set-up with the natural environment was another top effort by the stage designers and construction team.

The Electrum stage was the most creative of the three main stages, set amongst beautiful gumtrees.
Photo courtesy of Arianna Leggiero

After the dancey vibes provided by Gerd Janson at Beton Brut on Saturday night, which included the weird and wonderful ‘You Spin Me Round’ – Dead Or Alive, there was a sense of curiosity and excitement in the air when Dutch maestro Fatima Yamaha graced the stage for his live show.

He started off slowly and gave the crowd a chance to catch their breath, before gradually building the tempo.

In his first visit to Australia, his set was a highlight of the entire festival.

The Saturday night moment that everyone was waiting for had arrived, with the renowned ‘What A Girl To Do’ performed to perfection as light rain fell, with a collective hum from the endearing crowd adding to the unbeatable atmosphere.

It was a magical moment that many will remember forever and was equally topped by his more upbeat ‘Araya’ – a newly released banger that goes off live and was a fitting way to end a big day and night.

Fatima Yamaha’s live set on Saturday night was one of many highlights of the inaugural Pitch.
Photo courtesy of Arianna Leggiero

Sunday’s list of internationals at Beton Brut was what drew many to buy tickets as soon as Pitch announced its initial line-up.

Henrik Schwarz earned a number of new fans with his live show before his fellow German quartet of Âme, Recondite and Dixon kept the vibes at an all-time high.

At Electrum, Kollektiv Turmstrasse dished out some juicy upbeat techno that had the smaller crowd moving, with their favourite ‘Sorry I Am Late’ a winner as the sun went down.

If you needed a break from techno, Aussie disco kings were a popular choice at Vanish Point and surprised the appreciative crowd with a superb cover of Human Nature’s ‘I Want You’, which was 100x better than the original.

Ben Klock’s three-hour set to close Beton Brut on Sunday night was the highlight for many, but it was hard to go past DJ Tennis at Electrum, whose set was on par with his closing set at Let Them Eat Cake in 2016.

His timely selection of the belter Michele Mininni – Hyper Martino (Red Axes Remix) – which was earlier dropped by Red Axes themselves on the very same stage – was absolute bliss.

The fun-loving crowd was what made Pitch so special.
Photo courtesy of Duncographic/Pitch

Mad Monday quickly came around and with many punters departing, a few stragglers and some tired legs, it was a more mellow and groovy affair with much of the crowd taking the opportunity to take a seat side of stage and relax.

Adana Twins were on point at the Electrum stage and when they played Isaac Tichauer – Higher Level (Bicep Remix), it was the icing on the cake.

For those who wanted one last taste of the spectacular Beton Brut, John Talabot was the answer in the afternoon.

But there was no more fitting farewell than Melbourne’s own queen of disco, CC:DISCO!

Originally scheduled on the timetable to close the festival at Electrum, she was swapped to the Beton Brut and proved why her reputation as a world-class party starter continues to grow.

Without a doubt, the collective singalong to Chaka Khan’s ‘I’m Every Woman’ was an epic moment for those who remained on the dancefloor.

Speaking to Autosea this week, CC rated Pitch A+.

“There’s so much work that goes into putting on festivals and I think they nailed it,” she said.

“The stages and sound was mint. And the crowd was great – any crowd that can let you genre jump, bring it down and get down like that after four days is impressive as.”

Speaking of the crowd, you would have been hard-pressed to find a fuckwit amongst the estimated 7000 people at this gathering of likeminded partygoers.

The costumes, witty doof signs and random contraptions got funnier and weirder as the days went on, adding to the spectacle.

In what is a tough generation for festivals of Pitch’s ilk, the reports from authorities have been so far, so good, with the local council and police very pleased with the event.

The inclusion of the local community is another reason why these festivals are so important, with the Moyston-Willaura Community BBQ doing a roaring trade to inject much-needed funds to the country towns and locals spoke very highly of the event.

Melbourne disco queen CC:DISCO! was a fitting finale to four wonderful days in the bush.
Photo courtesy of Duncographic/Pitch

Like any festival in its first year, punters must be patient and expect some teething problems.

The renegade stage featuring mainly local acts was lacklustre and will no doubt be improved next year.

Better signage for the free drinking water must be considered and a few extra showers wouldn’t go astray.

The music will hopefully go later than 3.30am next year with more lenient noise restrictions.

And whoever’s brilliant idea it was to place viewfinders in random locations throughout the festival site – maybe next time they should be real binoculars so you can get a closer look at the beautiful surrounds of The Grampians, instead of the same pointless iceberg graphic from different angles.

When you consider how wonderful the festival was, these extremely minor issues are far from criticisms, with no impact on the fun times shared by all.

Every friend or acquaintance you bumped into made the same comment – ‘How good is this?!’

Pitch organisers summed it up impeccably – “We couldn’t have asked for a better behaved crowd for the inaugural Pitch Music & Arts festival. Your enthusiasm, respect and love is what made this weekend so special to us, our staff, the artists and of course, each other. From all of us here at Pitch – thank you! We look forward to sharing the many more special years to come.”

For a festival in its first year, Pitch absolutely nailed it and certainly delivered a ‘forward thinking, all-inclusive, music and arts festival like no other’. 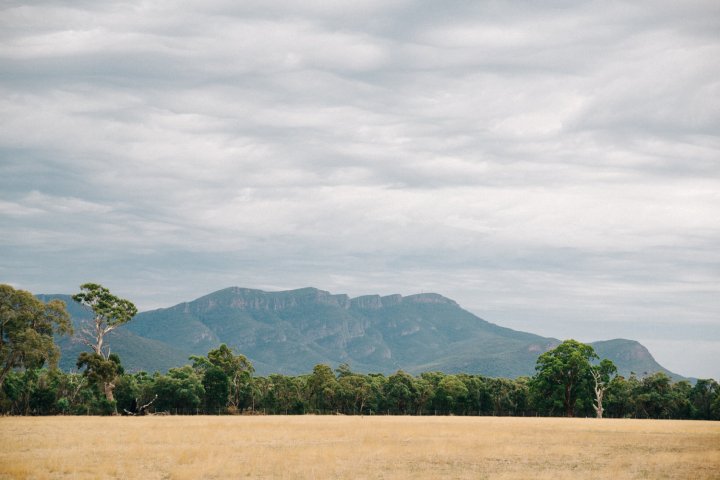 We can’t wait to get back to this magical place again next year.
Photo courtesy of Arianna Leggiero