The announcement of a new collaborative project between HTML Flowers and Oscar Key Sung could not have come at a better time. After their recent beloved performance at Strawberry Fields and with Oscar’s upcoming DJ set at Autosea and Beaut’s anticipated Megabeaut party this Sunday, having a sneak peak what him and his best friend HTML Flowers have been working on became a great treat for a casual Friday night.

Unlike the usual techno-sounding beats ringing in the ears of those attending events in which Autosea makes an appearance at Boney, we were instead treated to multiple genres and tones ranging from rowdy-sounding Sleigh Bell synths, smooth sounding vocals and head-banging hip hop.

HABITS and Jalé! introduced us to the stage and HABITS and took us to another place. They introduced their incredible performance with a beautiful track with deep, haunting vocals sounding like Romy Madley Croft and Oliver Sim of The xx. After giving chills down the spines of all of those in the audience, they quickly transitioned to an aggravated sound similar to that of Yolandi and Ninja of Die Antwoord, screaming heart-felt lyrics and leaving the crowd to feel an overwhelming wave of excitement and raw emotion as Matt climbed onto the sound equipment losing himself completely, in the most perfect way possible. 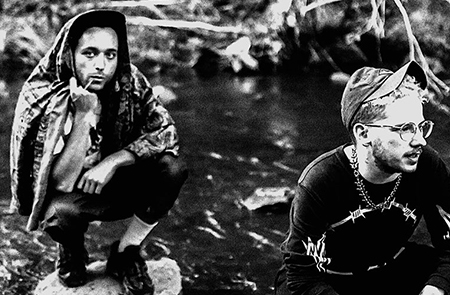 HTMLflowers, as excited as he possibly could be, set foot on the stage to not only celebrate loyal fans hearing the hard work that him and Oscar have put into their new album, but to celebrate his birthday. The duo seem have completely different sounding styles of music but somehow they seem to work so well together. HTMLflowers’s clapping and beat-popping lyrics about all the important things- friends, life, love and dick size provided an energy that was supported perfectly with Oscar Key Sung’s soothing and soft melodic voice, resulting in LOSSLESS creating something very special.

Oscar’s presence on the stage was mesmerizing, and I promise I don’t just mean by what we got to look at. The heart-melting electronic producer treated us with a beautiful sound with the addition of beats by HTMLflowers that vibrated the floor below us, forcing the audience to throw their heads in time to the electric and heavy beats that were dropped and leaving us wanting much, much more by the end.