Uruguayan Cosmonaut, aka Federico Jorcin, made a special friendship with a Peruvian across the world over Soundcloud. While miles and continents away, they had the same love for a certain genre of music, and it wasn’t long before the two crossed paths when Jorcin stayed at his humble abode in his friend’s new city, Melbourne. Now he too calls it home.

He’s been a staple to the Uruguay underground music scene for quite some time, with his monthly Live Sessions combining elements of old-school techno, electro, house and acid. He sold out his release on London/Barcelona-based label ‘Breakfast Musik’ within a few short weeks and is about to release ‘Acid Thriller’ through Romanian label ‘VARME’. We spoke with him before he plays at Crate Mate’s upcoming immersive art and music one night experience Tessellate about connecting with people across the world over the internet and living and breathing this multi-cultural city. 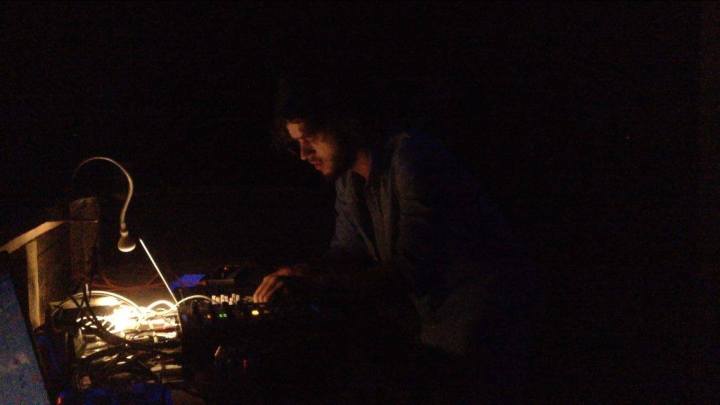 You’re originally from Uruguay. How did it all start for you?

Well, I started playing piano as a kid and then got myself a bass and started a punk band as a teenager. Finishing high school, me and a group of close friends started experimenting into instrumental progressive rock, starting to use effect pedals and synthesizers. That led me to explore electronic sounds. In 2015 I started to get into virtual and electronic synthesizers and drum machines to start this project.

What’s the scene like over there and how does it compare to Melbourne?

The scene in Uruguay is very special. We have a lot of talented musicians, producers and DJs in a population of only 3 million. So it’s more concentrated due to the low population and the small size of the country. There is a strong established underground scene always looking to expand, looking for new concepts and sounds. I haven’t been active enough in the Melbourne scene to compare it to Uruguay’s, but I find it a promising scene, growing fast and heading in the right direction.

Melbourne has in general a very wide range of artists and an audience that is opened to see and listen new stuff. I love that, that’s what makes Melbourne my new home. Melbourne is full of people from all over the world, sharing and mixing cultures, which is always a perfect situation for art finding new ways out there.

And what made you make the big move?

Moving to Melbourne was a work related decision together with the will of exploring new places. I didn’t really know much about Melbourne before coming here but after seeing the city for the first time I just loved it. Even more once I started enjoying the lifestyle and meeting the amazing multicultural people that live here. That is something we don’t have in Uruguay, here you can meet people from very different backgrounds and cultures.

I have met amazing people while being here. I met my good friend JJ from Peru over Soundcloud before coming, and I stayed at his house for the first two weeks in Melbourne. I also met over the internet and because of music, my now housemate Tim, who has become a very close and special friend. We are now part of the same collective, Losing Control. I am happy to say that the people I have met is the best reward music has given me. They have been very important during my stay here so far.

Tell us about your live performance – how did you get into it, what’s your set up and how do you compare it to other sets?

I combine both virtual and electronic synthesizers to produce and play live. Getting electronic music gear in Uruguay is pretty hard, both for its high prices and for the availability, so I had to use borrowed gear and virtual sound generators to produce for a long time. When playing live I combine electronic instruments with Ableton using virtual synths and original samples made on Logic.

Do you follow a similar process every time you produce a track or does the process vary?

I don’t really follow a process or a particular style, sometimes I have an idea sounding in my head, sometimes I just sit and start writing patterns or playing the keys. Then the track starts to build up, adding layers or hits and giving it a progression, putting the story in order.

Tell us about working with London and Barcelona label ‘Breakfast Musik’. You sold out your release within a few weeks?

This was my first vinyl release, as well as the label’s. Breakfast Musik’s team listened to some of my tracks and offered me to release for their label. Me and the guys all worked hard to release a good record, and the distribution of Subwax did an amazing job as well. I’m grateful that they trusted me and all worked out good.

And now you have ‘Acid Thriller’ coming out through Romanian label ‘VARME’. How did you connect with them?

Yes! It is coming soon, with 3 techno/acid tracks. We connected with VARME’s head Paul Popa back in 2017 through Soundcloud and gave him the tracks that are now going to be released. Since then we have been in touch via internet, and i’m looking forward to visiting Europe soon and meeting all these amazing people that I’ve known, all thanks to the internet.

Thanks for the chat Cosmo and best of luck in Melbourne!

Cosmonaut will be featuring at Crate Mate’s immersive music and art evening for the second instalment of Tessellate, April 5 at Yours&Mine. Find out more here.